As some Year 10 and Year 12 pupils in England prepare to go back to school on Monday, secondary head teachers are having to overcome an array of challenges.

Plans shared with the BBC suggest the arrangements will vary widely. More than 300 schools and colleges told us they were mainly offering between five and 30 hours of face-to-face teaching each week.

Some are making the return gradual, starting with pupils who are struggling the most, with many providing individual pastoral sessions to check on mental health.

The Sixth Form Colleges Association says schools and colleges should ensure that extending face-to-face teaching does not impact on support for pupils who are still at home.

At Ivybridge Community College on the southern slopes of Dartmoor in Devon, principal Rachel Hutchinson has been putting the final touches to plans for welcoming back just over a quarter of the college's 2,500 students.

The Year 10 and 12 pupils who will be doing their GCSEs and A-levels next year will return to a very different school from the one they last saw in March.

"We're working very much with social distancing measures... looking very much at the timetable and what we can do safely and sensibly."

But she's also determined to give them an "effective education". 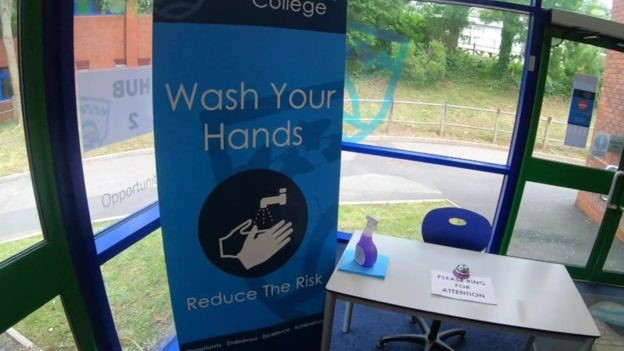 How will school transport work?

Pupils arrive by school bus, public bus and train, some are dropped off, while others walk or cycle.

New mask-wearing and social distancing rules on public transport, plus a ban on sixth-formers car sharing, mean clear communication is key, she says.

Each school bus can now carry just seven students, which means that, while bringing back a quarter of the pupils is feasible, larger numbers might be impossible, she says.

How much face-to-face teaching will returning pupils get?

At Ivybridge, even these smaller numbers of students will have to be part-time to ensure safety.

For Year 10s, there will be one full day of teaching each week, with 90 minutes each of maths, English and science.

The other subjects will continue to be taught remotely on the days pupils are at home. 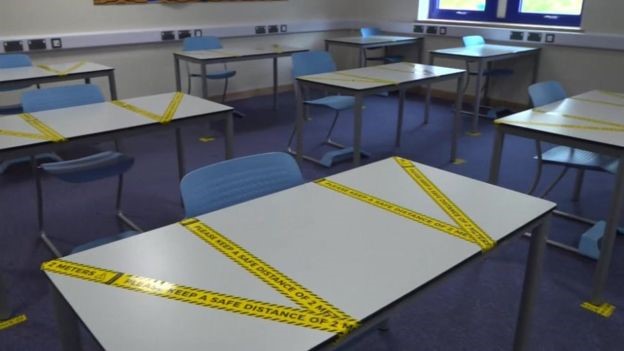 The post-16 students will have seminar days to reduce movement around the site.

They'll get two full days of each A-level over the five weeks before the end of term, says Mrs Hutchinson.

"We think it's very viable, its do-able and it's really important for their education."

How will social distancing work?

There are 2m distancing markers along all the corridors and a one-way system.

Staff in high-vis jackets will monitor every entrance, there are hand-sanitising stations and lots of posters and banners to remind children not to crowd each other.

"It's going to be that supermarket feel - when you go to a supermarket for the first time with the trolley queues," she says.

With reduced numbers, it's manageable, she says, but increased numbers of students would present a challenge. 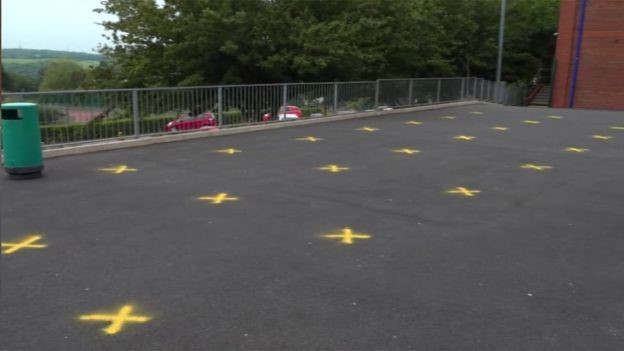 How will pupils cope with being back after so long?

"I'd like to think as a college we've been really strong on our pastoral care," says Mrs Hutchinson.

Tutors have had lots of email contact with students, with fun, remote activities like cake-baking to keep pupils engaged with the school community.

However, she recognises some will have fallen behind and so there is a recovery programme to help them catch up.

She says a key aim of returning to school is to ensure pupils' wellbeing and she will keep a particular eye out for socially disadvantaged children.

About 30 children have opted to take up the college's offer of one-to-one tutoring, with support available for families who have suffered bereavement or illness or are anxious, she says. 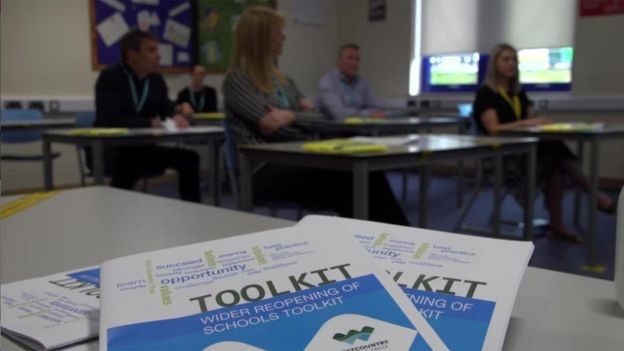 One of the most important aspects is "getting it right for my staff", she says.

"They are absolutely working round the clock to maintain communication, the pastoral welfare and wellbeing of the children, as well as checking in on the learning."

Some have their own health issues, many will be running busy households without childcare and may feel anxious about returning to face-to-face teaching.

"It's managing staff welfare and making sure that staff feel safe and are ready to come back to work," she says.

And all other pupils at the school?

Years 7, 8 and 9 will continue to be taught virtually and pupils in Years 11 and 13, whose exams were cancelled will still get support.

"It's keeping an eye on a number of schools really; our virtual school as well as the new school that's going to be returning.

"The exciting thing is, for the first time ever, children are saying they miss school," says Mrs Hutchinson.

What about September and summer schools?

Getting the college back to a "new normal for September," is another challenge.

It will be welcoming the new Year 7s, plus a huge group who have not been in school since March. 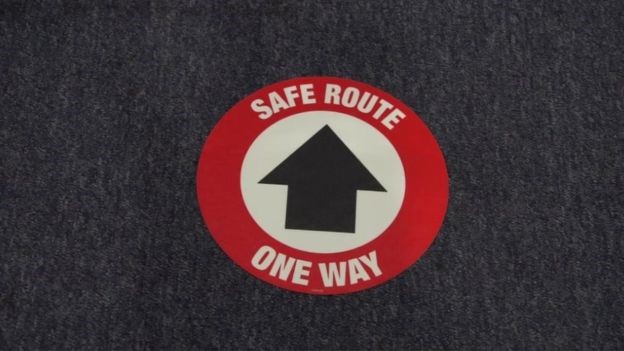 Mrs Hutchinson says that unless the distancing measures are amended, schools will have to run a blend of classroom lessons and virtual learning in September.

She believes the idea of schools opening over the summer, when staff have already been flat out since March is "quite controversial".

"The summer six weeks are going to be key for us to get ready for September," she argues - and many staff will have to work through to prepare.

"So to open for children in as well will be incredibly challenging," she says.

She hopes both children and teachers can take their normal summer holidays, ready for a new start, whatever form it will take.

Wales will begin opening schools on 29 June, with Scotland and Northern Ireland waiting until August.