Caring for the College Animals During Lockdown 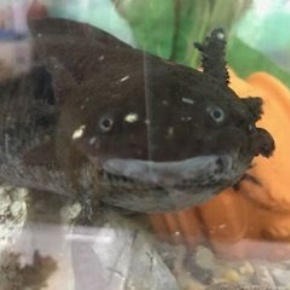 The axolotl may not be the most beautiful of animals, but Mrs Peters, Senior Science Technician, has been coming into the College during lockdown to feed them and the College goldfish.

Mrs Peters explains, “I'm coming in twice a week at the moment to feed them, they are carnivorous so I keep some heart chopped up for them in the freezer and then slice it (to resemble worms) to hand feed them, they're not very good at finding the food for themselves, so I dangle it in front of their noses and they snatch it, which when you first do it can make you jump!   We've had them for around four years now and they seem quite content, particularly during this very quiet time, although I think they may miss the students curiosity a little, they do tend to march over to the front of the tank for a good look if anyone enters the room.

We were fortunate to receive our Axolotl from another school, we had four, but after a while realised we had three females and one male, so had to separate the male. From the clutch of eggs that were laid, one was reared to adulthood, once I was able to ascertain the sex, I popped him in the male tank. The two males are now at Exmouth College.

Our dear old aged gold fish (and he really is ancient - for a fish), arrived a year or two after I did, so he's been with us around twelve years, he has very few scales left, can't share a tank with any other creature (he's eaten previous tank mates) and likes to flick water at you. He is currently on a feeding 'holiday block' and also some supplementary fish food, he does seem quite happy with his lot!”