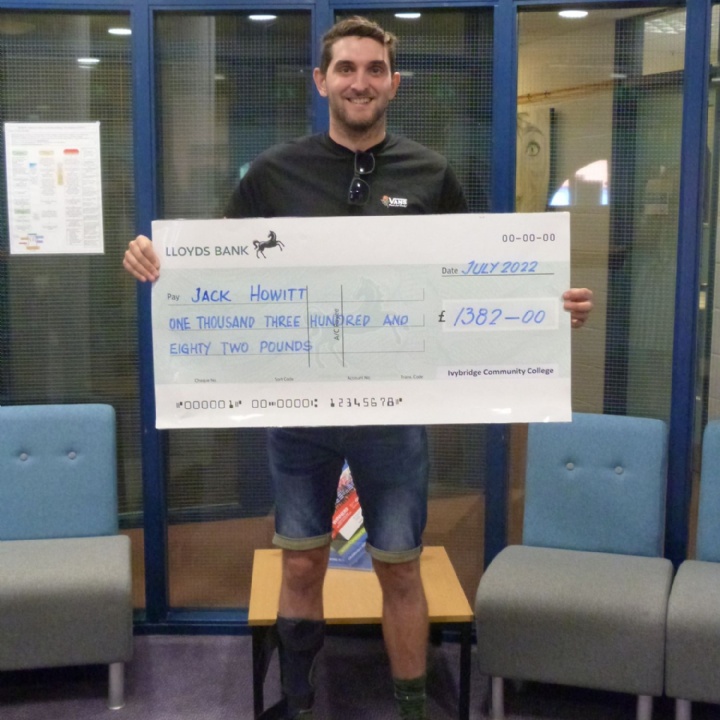 Inspired by former student Jack Howitt and his mission to join the 2024 Paralympics, Year 12 students have been making a huge effort in their fundraising activities.

Over the last few months, Year 12 students at Ivybridge Community College have raised an amazing amount to support Jack Howitt’s dream of competing in a Para-triathlon.  The whole Year Group contributed to the effort, raising a grand total of £1382, which they presented to Jack last week in the form of a ‘Giant Cheque’.

Jack, 22, first became ill in 2016 during his last year at the College. Whilst he was finishing Year 13, with a move to University imminent, his symptoms were originally misdiagnosed as stress. This began a long period of illness for Jack, with an eventual diagnosis of Stage 4 brain cancer. Jack was given only a 3-5% chance of living more than 5 years, and a 12-18 month average survival rate from the diagnosis.

An operation and intense course of chemotherapy and radiotherapy followed, with Jack taking up to 30 tablets a day. Although he completed his chemo in August 2020, his mental health was suffering due to lockdown, made worse by his weight fluctuations, the result of the extreme amount of medication he was taking.

Determined to regain control of his life, Jack bought a recumbent bike and cycled for hours, kick-starting his need and desire to do more.  Jack has now become an inspiration to many students at the College, visiting during Mental Health and Wellbeing Week to talk about the difficult times he has faced and how he managed to find the drive and resilience to test his mental and physical limits.

Jack hopes to compete at the Paris Paralympics in two years’ time, in the Para-triathlon, whilst also completing his university studies. Ivybridge Community College students’ fundraising activities, which included a bake sale and competing in a triathlon, will help support Jack with his 1-2-1 sessions in the pool, as well as go towards the purchase of a Time Trial or Triathlon bike.

If you wish to support Jack, you can donate to his gofundme page.