Educating on Diversity Throughout History

Ivybridge Community College Year 9 students have been embracing the opportunity to reflect on the diversity of individuals during their History lessons.

Matt Warne, teacher of History said, “I love teaching History.  Every topic has something that excites me, and I love informing our students about the nuances of the past.   The problem I constantly identify is how male-orientated the curriculum is.  Most topics we study contain stories about individuals who are usually rich, old, white, and are almost always men.  It is important and pleasing to note that this has been acknowledged and History teachers up and down the country are actively looking to teach a more diverse curriculum.”

The Year 9 students have been studying Medicine Through Time and have recently finished their unit on WWI Medicine.  Before moving onto a new topic, the class undertook an enquiry on 20th Century Medicine, focusing on war as a catalyst for change.  It was during the second lesson about how significant individuals were in advancing medicine and surgery where the problem came:

“So Year 9,” asked Mr Warne, “what do we notice about all of these people we have learnt about?” and the class replied unanimously, “They’re all old, white men!!!”

In order to balance this, Mr Warne introduced them to a plethora of new individuals, including: Hayat Sindi, Flossie Wong-Staal, Alice Ball, Hilda Leyel and his new favourite, Dorothy Hodgkin, who, despite her crippling rheumatoid arthritis, solved the atomic structure of molecules such as penicillin and insulin, using X-ray crystallography. 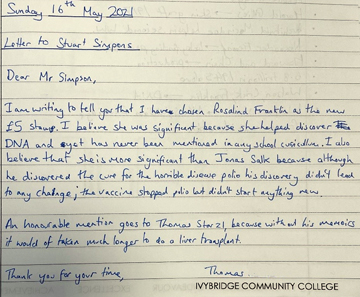 The class was tasked to choose their most significant historical figure by selecting the one most deserving to go on a Commemorative Royal Mail stamp.  One student, Tom, stated his case to Royal Mail’s CEO to include Rosalind Franklin and another student, Owen supported Carl Djerassi and the discovery of the Contraceptive Pill. 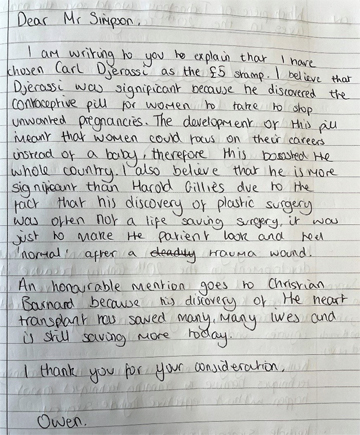 Mr Warne added, “I believe that we have a great responsibility when it comes to equality and diversity.  We want our students to be able to discover new role models who do not always get the same limelight as these “rich, old, white men” and for them to be amazed at just what these people went through when trying to show the world their new discoveries.

We live in a diverse world which does not echo our diverse past.  It is time we do more to change this narrative.”

Please refer to this fantastic website: https://illustratedwomeninhistory.com/ where the author aims to tell the story of a different woman in History each week.

If you are interested in investigating more diversity in the history of War, then please read Wendy Moors’ Endell Street which details life at a WWI hospital run solely by women.

Here is a taster:

They had suffered long and agonizing journeys, having been scooped up from the battlefield by regimental stretcher-bearers, sometimes after lying abandoned for hours in ‘no man’s land’, before being shuttled back to casualty posts in tents and dugouts for basic first aid, a shot of morphine and, perhaps, a hurried operation. They had been transported in ambulance trains to one of the French ports, crammed into hospital ships to cross the Channel, then packed into Red Cross trains bound for London. Arriving at one of the mainline stations, they had been collected by volunteers who drove them in ambulances or private cars across town. If they asked their drivers where they were being taken, they were told to ‘the best hospital in London’.