On Thursday, 6 May 2021, students in Years 12 and 13, studying the BTEC Public Service course, were delighted to welcome two Police dog handlers and three of their dogs to Ivybridge Community College.

Year 12 student, Jack, who is currently studying the BTEC Public Service course, said, “At the beginning of the session the dog handlers talked to us about the various different roles and responsibilities within the UK Police Force.  Finding out about all of the roles was very helpful indeed.  The officers also explained to us the best procedure for applying to enter the Police.  This gave students a good insight into what policing is actually like, by explaining the various roles available.  The two officers were very open about their role and told us about the difficulties they face whilst training and working with their dogs.

We were then introduced to their three dogs, namely Finni, Monty and Ollie.  Finni was in training; Monty, a Spaniel, works as a Drugs dog and Ollie, a German Shepherd, works as a Tracking dog.  The dogs usually takes about thirteen weeks to train.  The thorough training of the dogs ensures that they are very obedient and a great asset to the police force. 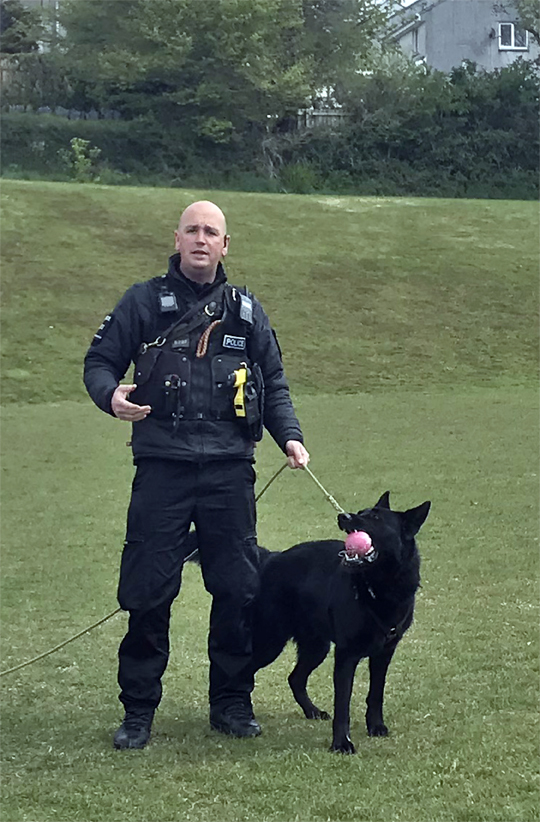 The officers did multiple demonstrations of the dogs’ abilities, which were very impressive.   The first demonstration was a ‘search and recovery’ where a police officer laid a track for the dog to follow.  It was explained to us that the dog was following disturbed ground through the footsteps of the officer.  The second demonstration was to release the dog for it to take down the ‘offender’, who was using a bite guard for protection.  The last demonstration showcased Monty’s ability to track down drugs which had been hidden in hard to find places.”

“This was a fantastic opportunity for our Public Service students to meet and interact with active Police Officers who have over 25 years’ experience in the force.  The information shared and discussed was very insightful and allowed our students to gain an appreciation for the diverse nature of a career with the Police Force.

This visit was made even more special with the introduction of Ollie, Monty and Finni who are all working police dogs, who compliment the work of our force.  Watching them in action was phenomenal.” Alex Mitchell, teacher of PE.