In September just under 400 students in Years 11 and 13 in the academic year of 2018-19 were nominated by their teachers for either their outstanding Endeavour or excellent Academic Achievements.

Those who were nominated attended the annual Awards Evening, which is the most prestigious event in Ivybridge Community College’s calendar.

This year the event was hosted by two Year 13 students, Jacob Atkins and Emily Bruce.  The two notable Guests of Honour were Professor Dann Mitchell and Jon White.   Both provided inspirational talks, with Jon talking about his experience as a Marine and his subsequent injuries whilst on active duty.  Staff and students alike were humbled by his positivity and desire to live life to the full, as well as continuing his endeavours in life.  Whilst Professor Mitchell stated that climate change is now happening and gave a very thought provoking and fascinating insight into his world of research at Bristol University.

Awards were given for Endeavour in academic subjects, Performing Arts and Sports Awards and finally, Academic Achievement.  Cups, shields and trophies were also presented across an array of areas.

Musical performances interspersed the Awards Ceremony included, “The Climb” performed by the Performing Arts Ensemble, “Rolling in the Deep” and “Uptown Funk” both were performed by the Big Band and directed by Lucy Annetts.  Finally, “Seasons of Love” from the musical Rent performed by the Musical Theatre Group.

Deputy Principal, Gill Taylor, said, “Having attended many of these celebrations I can honestly say that this was a truly fantastic evening.  It recognised those students who over a five or  seven year period, have truly shone and it was a sheer delight and honour to witness such worthy recipients cross the stage to receive their award and applause from the audience, which consisted of parents, staff, Governors and VIP guests”. 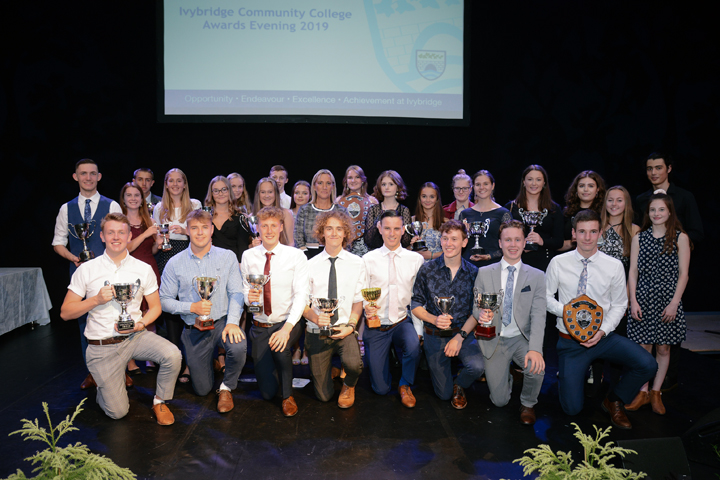