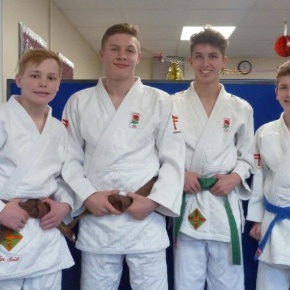 On Saturday, 3 December 2016 Adam Vosper, Tom Smith and Lewis Widdicombe fought at the British Championships.  Adam fought in the under 46kg category, Tom in the under 50kg and Lewis in the under 81kg.  Lewis’ group was up first at 0930; Lewis won his first two fights and narrowly lost in the semi-final.  He then went on to win the Bronze Medal in eight seconds!  Next up was Adam’s group which started at 1130.  Adam won three fights to book his place in the final, which he then won to become National Champion.  Tom Smith was up next at 1300. Tom won his first fight and sadly lost his second to place him in the repechage where he won one and lost one to be placed seventh.  On the following day Pierre Michelin fought in the under 66kg category, starting at 1330.  Pierre won his first fight and lost his second, this put him in the semi-final which he lost, but still resulted in winning the Bronze Medal.