On Friday, 3 May the Ivybridge Community College Under 13 Girls’ Football FUTSAL Team made College history becoming the first Girls’ Football Team to reach a National Final.

This was an amazing achievement in itself, but Ivybridge went one further and won the FA National Under 13 FUTSAL Schools’ Cup.

The long road to St George’s Park started in March, in the regional qualifiers, with the team winning all three of their games-

They then competed in the regional final, beating St Peters, Exeter 2-0.  This confirmed their place in the Southern qualifiers in Birmingham.

In Birmingham they again won all three of their games-

This enabled them to qualify for the FA FUTSAL National Cup.  The final was played at the FA Football headquarters at St George’s Park, Burton upon Trent, Staffordshire, in the International FUTSAL arena.    Ivybridge Community College’s Under13 Girls’ Football FUTSAL Team defeated All Saints Catholic College, Huddersfield 4-2, to lift the FA National FUTSAL Cup.

Dave Leonard, Teacher of PE said, “I am extremely proud of all of the girls.  This fantastic achievement has made Ivybridge Community College Girls’ Football history.” 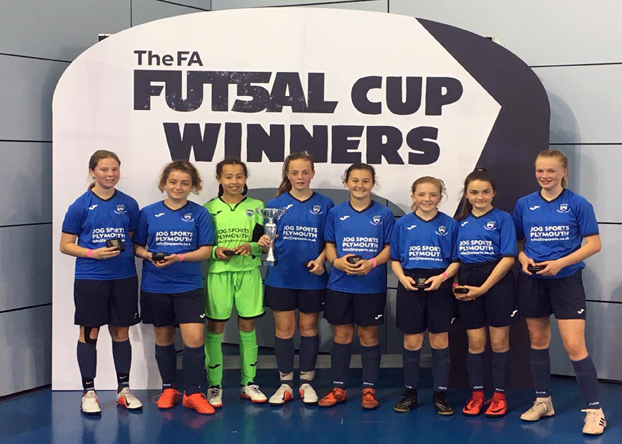