He has recently written a new book ‘Unstoppable’ about twins Kaine and Roxy, who are both accomplished sports people, and the rivalry this has caused between them.  ‘Unstoppable’ has just won The Times Children’s Book of the Week (17 March 2019).

Dan was very keen to also involve Year 6 pupils from our Multi Academy Trust partner primary schools, so together with students from the College we were pleased to be able to offer places to180 students, who all received a signed copy of Dan’s new book. 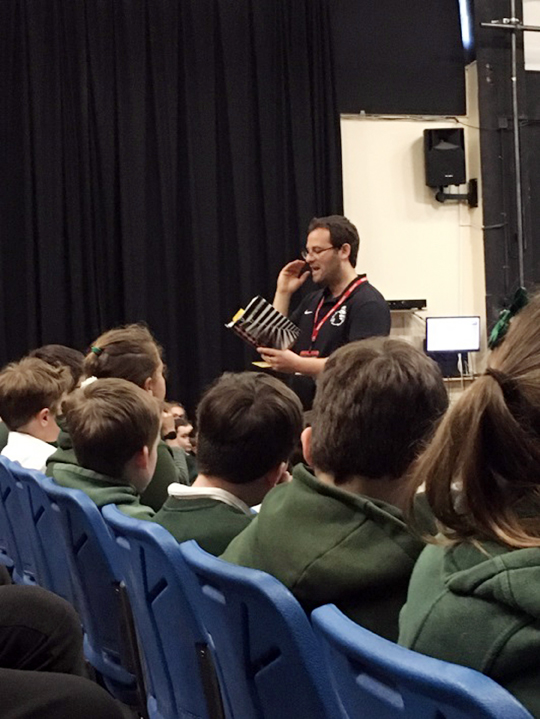 Dan is a massive football fan, having been taken to football matches by his dad when he was a youngster.   He started his working life early, with work experience for Radio Five Live, Sky Sports and Arsenal Football Club.  In 2002 Dan became a journalist for the England Football Team and began touring with them, rubbing shoulders with the likes of David Beckham, Rio Ferdinand and Stephen Gerrard.  It wasn’t until he tried to buy a birthday present for a friend’s boy he realised there was a distinct lack of football story books around, and so began the Jamie Johnson series.

Dan’s knack of drawing in his audience is sublime; he just talks about football and they are hooked.  He drops a few famous footballers’ names and they are eating out of his hand.  He spent a lot of time answering students' questions, with the best one winning a signed football.

Dan is a natural, and quickly built a rapport with them.  The questions asked ranged from “How did you get to tour with the England Team?” to “Did you like reading at school?”

A very enjoyable hour spent with an inspirational person.