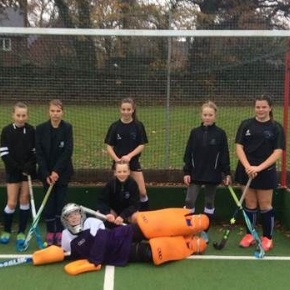 On Tuesday 22nd November the under 13 Girl’s hockey team travelled to Blundell’s School in Tiverton for the County Finals.

The Ivybridge Community College Team got off to a positive start when they picked up a point against Mount Kelly, the MK goalkeeper making a number of fine saves to keep the game tied at 0-0.  Ivybridge picked up a valuable 3 points in game 3 against Shebbear with an impressive 3-0 win which followed a 3-0 defeat to an experienced Exeter School side, the victory gave the girls a confidence boost going into game four where they won 6-0 against Tiverton, which kept their chances of making the semi-finals very much alive.  Ivybridge knew they had to win their last game against Colyton Grammar School to progress, with any other result meaning their opponents would go through in second place; with less than 4 minutes remaining the only goal of the game was scored by Ivybridge and the celebrations started as they made it through to the final four.  The semi-final saw the girls defeated by hosts and eventual winners Blundell’s School, this was the best placing for an under team from Ivybridge in recent years.