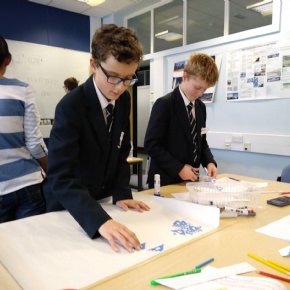 The students were involved in many enriching activities, which allowed them to extend their understanding of key concepts within Mathematics.

The day started with a warm up activity called Cryptarithms where calculations had been replaced by letters.

Students then went on to investigate The Bagatelle Game where balls are dropped into the top of an array.  They hit pegs on the way down either going left or right landing in a numbered box at the base.  Once the results were collated they discovered that the numbers for each row of the bagatelle are known as Pascal’s Triangle.

After lunch students looked into square, triangular, tetrahedral and hexagonal numbers which also appear the Pascal’s Triangle.  They then went on to produce posters showing what they had learned throughout the day.

At the end of the day Lucy commented. “I have been persuaded to do A Level Maths and there is now no way that I won’t.”  Abi said that she “had fun learning about Pascal’s Triangle.” The students behaved impeccably and were outstanding ambassadors for Ivybridge Community College.