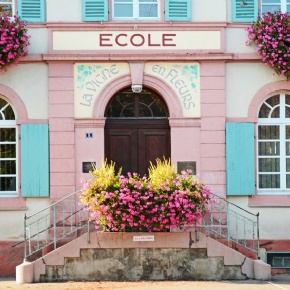 Year 12 test their language skills in a French Primary School

I stayed in Fougeres, which is in Brittany in the north of France.  It is a mid-size town that is bigger than Ivybridge and the exchange was organised with students from the college in Fougeres.  During the week we spent two days at a local primary school, where I read to the children and helped them whilst communicating in French.  In some respects this was a challenge to teach children in a foreign language, but was interesting to see the differences between French and English schools.  The following day we visited Normandy and saw the beaches and the American war memorial which was a cultural experience.  This trip has aided me immensely with my languages skills by being able to speak the language, which will be valuable practise for my French speaking exam in a couple weeks.  I would recommend an exchange for other students who are looking to improve their language skills as I found it incredibly useful.