Ivybridge Community College Year 10 student, Ollie Murphy’s achievements in the sport of ‘XC’ - Cross Country Mountain Biking are definitely a cause for celebration.  He is currently ranked second nationally and has secured a place on the British Cycling Regional School of Racing.

If you talk about mountain biking to your friends what does it conjure up?  Riders throwing themselves down steep slopes at breath taking speeds, crazy jumps or possibly just riding your bike off-road?  There are many different types of mountain biking but Cross Country or XCO as it is sometimes called (the ‘O’ is for Olympic as it is the only mountin bike discipline in the summer Olympics) is the type of racing that requires the skill of a downhill racer with the fitness of an elite road rider.  It really is brutal.

The courses are normally around 5km in length and for juvenile riders they cover between 2-3 laps.  There are normally multiple steep, technical uphills, slippery roots, tricky descents and often small jumps.  There is no rest; from the gun it is flat out.  You go as hard as you can on the uphills and hang on for the downs.  Crashes are common and retirements with injury or mechanical faults often depends on your skill as well as a bit of luck (and some decent kit). 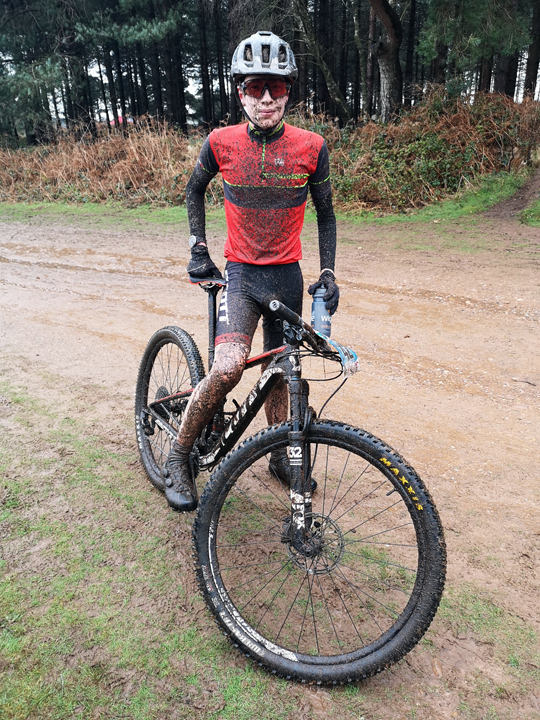 Ollie has been racing the local circuit for a long time, mixing XC with cyclo-cross in the winter, and winning many along the way.  In 2019 he was second in the South West Championships and won the overall SW XC Series.  The 2020 campaign started fantastically in March with a win in Woodbury, Exeter, beating the South West champion in the process.  His achievements gained him second in the national rankings and a place on the British Cycling Regional School of Racing but sadly, due to COVID, everything changed.  This was the last outdoor race until September when British Cycling allowed organisers to start putting on races again.  He competed in two races at Grammercombe Woods near Haldon, Exeter winning both events.  The second race saw Ollie crush the opposition beating the current, No.1 ranked, juvenile rider in the UK, and all the riders in the age category above him.  A truly dominant performance in very wet, slippery conditions.  A testimony to the hard work he has put in on his fitness during lockdown and through practicing his skills on the local trails of Dartmoor and Cann Woods.

Ollie said, “It is hard combining training and school work and keeping the motivation to do both.  I am aiming to do well in the National Race Series next year which requires a lot of hard training but I am also determined to work hard at school as well.”

Since there was no outdoor racing or participation in club rides over lockdown, he made use of the indoor cycling platform called Zwift.  This uses an indoor trainer which feeds data about your effort and speed into a computer which then uses it to move a character in a virtual world online.  Using this he has been racing online against people from all over the world and some organised British Cycling Youth races.  He is still using this in combination with some outdoor rides to enhance strength and stamina.  When current preventative measures allow, Ollie will be able to use the Strength and Conditioning facilities at the College.

He has again been offered a place at the South West of England Regional School of Racing for 2020/21, so he is endeavouring to maintain his fitness over the winter and come into 2021 ready for the National Series.  This is the premier XC race series, where he will be up against the very best riders in the UK.   With the progress he continues to make he should be stronger and fitter than ever and will hopefully be on the podium showing that Ivybridge Community College really is the best place to excel at sport.

“Ollie has shown himself to be an incredibly talented and determined rider and as a College we are proud of his achievements in this challenging sport.  We wish him all the best for his future endeavours, both in College and with his upcoming mountain bike competitions.”  Kelly Olive, Deputy Principal.